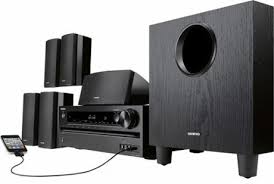 Just about everyone enjoys watching a movie in the home with surround sound. For starters, you should know that the basic building blocks of any entertainment system are sound, sources and displays. For most media rooms, the sound or audio system is a combination of an audio/video (AV) receiver plus 5 or more loudspeakers and a subwoofer. The heart of the AV system is the receiver. Today’s receivers perform many functions. 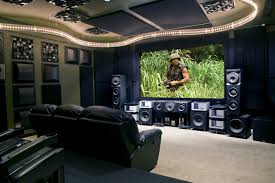 The receiver processes the audio, including the information for surround-sound effects. On some newer receivers, it also performs video conversion. Many better televisions also have audio amplifiers, connections for multiple sources and surround processing, but for most applications it is better to use a separate audio video receiver. The receiver will almost always have more power and flexibility.

The receiver contains 5 or more audio amplifiers, which power the main loudspeakers. Most subwoofers have their own amplifiers. It’s easy get wrapped up with the wattage rating for a receiver, but keep in mind that all watts are not created equally. There are many different ways of measuring the wattage output of an audio amplifier; lower-quality amplifiers are often rated at a smaller frequency range.

The loudspeakers in a typical media-room system include:

A center channel loudspeaker, which is the most important loudspeaker. Virtually all of the dialogue is sent to the center channel. Bear in mind that a low-quality speaker will make it difficult to understand the actors in your favorite movie. The center channel speaker should be placed as close as possible to the television. It is usually mounted directly above or below the screen.

At least two rear surround sound speakers to give the sound a 3D effect. They should be placed above and slightly behind the main seating area. How much sound comes from these speakers depends on what the sound engineer producing the program wants. In many movies that are mostly dialogue, the rear speakers might never be used, while in an action adventure movie, they could be utilized during the majority of the film. Sound coming from the back can be as dramatic as an airplane flying overhead, or a car approaching from the rear in a chase scene, or as subtle as background noise in a restaurant. 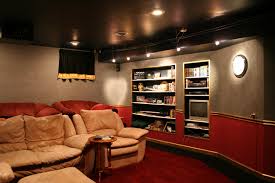 A subwoofer can be placed almost anywhere in the room. Humans can’t identify the direction from which a bass sound comes; a phenomenon that makes it very convenient for placing the subwoofer in home theaters and media rooms.

Usually the largest of all of the loudspeakers in a surround-sound system, the subwoofer can be placed where it is partially or totally concealed. In some loudspeaker systems, the woofers for the bass are in the main left and right loudspeakers.